Join Heritage Expeditions on a thrilling in-depth exploration of Australia’s world-famous Kimberley Coast, one of the world’s most pristine and untouched wildernesses, aboard the luxurious, 140-guest expedition ship Heritage Adventurer.

Best explored by expedition vessel, this Kimberley cruise allows an up close and intimate exploration and immersion of this rugged wilderness dwarfed by nature on an unfathomable scale. Highlights of the voyage include the unforgettable spectacle of King George Falls cascading 80-metres down 2,000 million-year-old towering cliffs, the outdoor galleries showcasing the  60,000-year-old Aboriginal rock art of the Gwion Gwion and Wandjina people, World War II relics and early explorer history.

At Talbot Bay experience the power of the region’s massive tidal movements and the world’s only Horizontal Falls described by David Attenborough as “one of the greatest wonders of the natural world”, and marvel as the world’s largest inshore reef system at nearby Montgomery Reef ‘rises’ out of the water with the falling tide.

Enjoy astounding wildlife encounters and observations from the region’s iconic saltwater crocodiles through to the birding paradise of the Lacepede Islands and one of the world’s largest and most pristine mangrove systems along the Hunter River home to White-bellied Sea Eagle, Osprey, Red-headed Honeyeater, Blue- spotted Mudskippers, Fiddler Crabs and more.

Over ten nights cruising between Broome and Darwin you will discover the ancient landscapes and the untouched beauty of Australia’s iconic Kimberley and experience the truly epic scale of this magnificent region by ship and Zodiac on this unforgettable Australian adventure.

Heritage Adventurer is a true pioneering expedition vessel of exceptional pedigree. Often referred to as the 'Grande Dame of Polar Exploration' due to her celebrated history and refined design, she was purpose-built for adventure in 1991 at Finland's Rauma shipyard and specifically designed for Polar exploration. 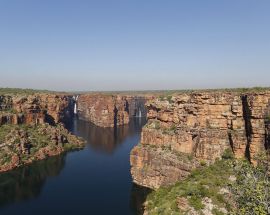 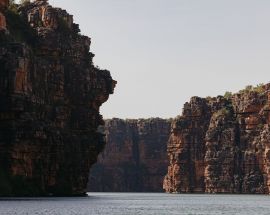 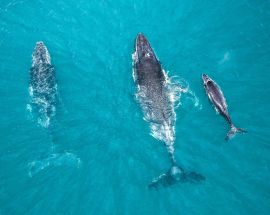 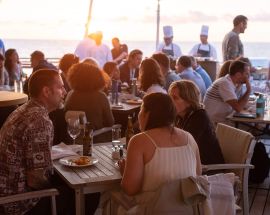 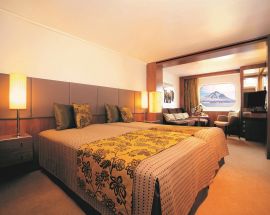 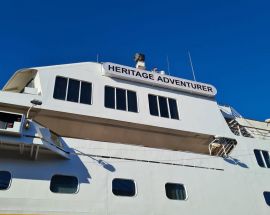 Please note: This cruise is sold in AUD

Please note that some images utilised in this imagery have been provided by Tourism Western Australia.

During the voyage circumstances may make it necessary or desirable to deviate from the proposed itinerary. This can include poor weather and opportunities for making unplanned excursions. Your Expedition Leader will keep you fully informed. Please note: Voyages are planned and scheduled pending final regulatory approval.

Single travellers are accommodated in Main Deck Single or Superior Single cabins at the stated prices.