This exclusive itinerary honours Alfred Russel Wallace and the time he spent in what is now Indonesia, independently working on the theory of evolution. Wallace’s observations of the marked zoological differences across a narrow strait in the archipelago led to his proposing the faunal boundary line, now known as the Wallace Line, which separates the ecozones of Asia and Australia. West of the line are found organisms related to Asiatic species; to the east, a mixture of species of Asian and Australian origin is present. While he was exploring the archipelago, he refined his thoughts about evolution and had his famous insight on natural selection. In 1858 he sent an article outlining his theory to Darwin; it was published, along with a description of Darwin’s own theory, in the same year.

On this cruise, revisit some of the areas that Wallace found so fascinating and hopefully experience the magic of seeing the bird of paradise in its full glory within its natural habitat. There are new adventures every day when exploring the tiny islands that make up this region. Trek through jungle terrain witnessing the wildlife as well as experiencing remote local villages. This area of Indonesia, referred to as The Coral Triangle, is home to arguably the most diverse marine life in the world. Explore on land and underwater exactly what captivated Wallace about this part of the world and what continues to attract scientists and nature lovers from across the globe.  Make use of the expert knowledge and inspiring energy of Dr. George Beccaloni who will be leading this cruise with a seasoned crew on the Ombak Putih. The excursions and discussions will nourish your mind, while the time spent on the boat will relax your body to ensure a truly unforgettable trip. The Ombak Putih is a traditional Indonesian schooner custom built from ironwood by Buginese ship builders in Batulicin, Kalimantan. Her keel was laid in 1995, and she was officially launched in 1997. In early 2015, the Ombak Putih was the subject of a major interior refit. Working with the unique heritage this vessel represents, her transformation is a conservation exercise back to authenticity, using only the best traditional materials, shaped by highly skilled Indonesian craftsmen.

The Ombak Putih is 42 metres long, and provides accommodation for up to 24 guests in 12 comfortable cabins. With approximately 400 square metres of public space divided over two main decks, the Ombak Putih offers both open and covered space in abundance, allowing for privacy and serene relaxing. All cabins are located below deck and offer private en suite bathrooms, portholes, individually controlled air conditioning, and ample storage space including safety deposit box.

Led by Captain Feri, his 14 dedicated crew members hail from all regions of Indonesia and are sure to make your expedition memorable. 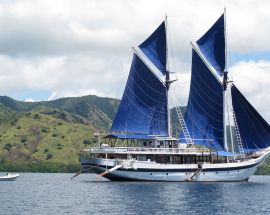 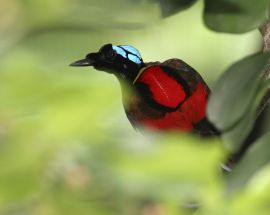 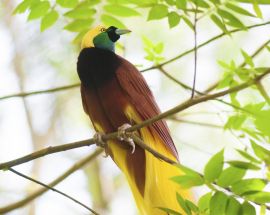 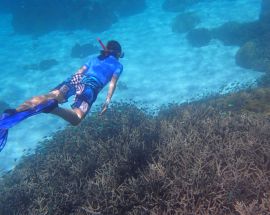 Note: Expeditioners will meet the Ombak Putih in Ternate, North Maluku. It is recommend that you to fly to Makassar (Sulawesi) one day in advance of the start date, and then take an early morning flight from Makassar to Ternate. Please note that airfares are not included.

A note from the operator regarding gratuities:

On your final day on board, you will have an opportunity to discretely contribute to a collective ‘captain and crew’ tip fund, which will be distributed equally among the crew members. Sea Trek Bali believe that between US$ 5-10 per cruising day is an appropriate amount (i.e. seven-day cruise = $35-70 total, not per crew member). However, this is just a suggestion and remains entirely up to the judgment and discretion of the guests. Sea Trek Bali discourage tips to individual crew members at any time, (except during cases of exceptional service). Tipping of your tour leader is welcome and at your discretion.

Every effort will be made to carry out the cruise itinerary as planned; however, these itineraries are subject to change at the captain’s discretion. When touring at sea, weather, currents, and even harbour masters don’t always co-operate with the planned itinerary, which sometimes make the planned schedules challenging or even impossible to carry out. For that reason, this written itinerary must be approached with reasonable flexibility. Sea Trek reserve the right to make alterations due to circumstances beyond its control and/or other factors, in the best interests of all. It’s all part of the adventure.

By completing this booking request you acknowledge that you have read and accept Expedition Cruise Specialists' and Sea Treks' terms and conditions.

Limited single traveller rooms are available on request upon payment of a 75% single supplement.