This expedition encompasses all the (sub-) Antarctic highlights in one voyage, with spectacular landings on the Falkland Islands and encounters with black-browed albatrosses and rockhopper pinguins. You’ll have the chance to meet at least six different penguin species. You’ll explore the transition from the sub-Antarctic to the Antarctic Polar Region, experiencing how the drop in temperature can make a huge impact on the colours of the surrounding landscapes; from the warmer tones of the sub-Antarctic side to the icy beauty of the true Antarctic. Witness how those few degrees in the transition zone can make the difference between an animal or plant species choosing to live on one side of the Convergence (the Polar Front) or the other.

This expedition also includes four days to discover the South Georgia Islands, possibly the most beautiful place on earth. Be prepared for ten thousands of king penguins and their chicks, sea lions on the beaches, elephant seals, wandering albatrosses and Gentoo penguins and great historical sites including the trails of British Polar explorer Ernest Shackleton. The Expedition Leader has planned a visit to Orcadas station on South Orkney Islands and If the ice permits Plancius will sail into the Weddell Sea through the ice-clogged Antarctic Sound. Huge tabular icebergs will announce our arrival to the eastern side of the Antarctic Peninsula. This is an outstanding expedition that could quite rightly be described as the trip of a lifetime. M/V Plancius was launched in 1976 as an oceanographic research vessel for the Royal Dutch Navy a role she maintained until June 2004, at which time she was purchased by current operator Oceanwide Expeditions. She was completely rebuilt and refurbished as a 116-passenger expedition vessel in 2009 and complies with the latest SOLAS (Safety Of Life At Sea) regulations. Plancius is classed by Lloyd’s Register with an ice-rating of 1D and flies the Dutch flag. Limited to no more than 116 passengers and 53 cabins, her size ensures a flexible polar experience with maximum wildlife opportunities. She is equipped with 10 Mark V zodiacs, including 40 HP 4-stroke outboard engines and 2 gangways on the starboard side, guaranteeing a swift zodiac operation. Plancius is comfortable and well-decorated, but is not a luxury vessel. Her voyages in the Arctic and Antarctic regions are primarily defined by an exploratory educational travel programme, spending as much time ashore as possible. As if visiting the Arctic or Antarctic wasn't other-worldly enough there is a whole other world for you to explore - under the surface of the seas. Aiming for 1 or 2 dives per day (depending on weather and ice conditions) you will dive under shallow ice, down along walls, from the beach, or from a Zodiac. You'll reach a maximum depth of 20 metres (60 feet). Diving under Polar waters is like no other dive - the combination of water, sunlight, and ice formations creates an ever-shifting spectacle of colours. *Must be a certified diver. Not available on all expeditions. Enquire for details. 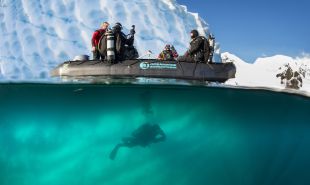 The itinerary described is for guidance only. Programmes may vary depending on local ice and weather conditions, the availability of landing sites and opportunities to see wildlife. The final itinerary will be determined by the Expedition Leader on board. Flexibility is paramount for expedition cruises.

You must be in good general health and you should be able to walk several hours per day. The expedition is ship-based and physically not very demanding. Although as much time as possible is spent ashore, travellers are welcome to remain aboard the ship if they like. To join most excursions, travellers must be able to get up and down the steep gangway from the ship to the water level to board the Zodiacs. Staff will assist travellers in and out of the boats. This will become progressively easier with practice. Ashore it can be slippery and rocky. You are travelling in remote areas without access to sophisticated medical facilities, so you must not join this expedition if you have a life-threatening condition, or need daily medical treatment.

By completing this booking request you acknowledge that you have read and accept Expedition Cruise Specialists' and Oceanwide Expeditions' terms and conditions.

A single supplement of 70% applies for sole use of cabins.