Reserve. Spend several days in this pristine landscape that’s home to the highest density of ancestral polar bear dens, the world’s largest population of Pacific walrus, and an astonishing variety of plant life. And before this Russian Arctic expedition comes to an end witness one more site few get to see - an ancient, mysterious display of whale bones and skulls erected on Yttygran Island. Built and engineered in Germany in 2003 for maximum comfort and safety, National Geographic Orion is equipped with the latest technology including large retractable stabilisers, sonar, radar, and an ice-strengthened hull. A shallow draught plus bow and stern thrusters provide the convenience of being able to maneuver close to shore. 14 Zodiacs ensure quick disembarkation and offer the ideal transport for up-close exploration. Best of all, Orion is equipped with a glass-bottom Zodiac that enables remarkably clear, gratifying observations of the undersea for those who prefer to stay dry.

National Geographic Orion accommodates 102 guests in 53 cabins, including several with balconies. She is spacious and modern, with a variety of public rooms that offer panoramic views of the passing landscape. Friendly and informal, Orion fosters a welcoming atmosphere where like-minded guests share in exceptional experiences and enrichment. 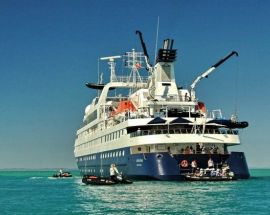 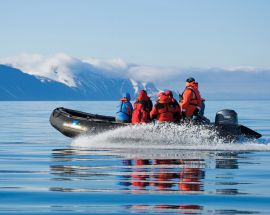 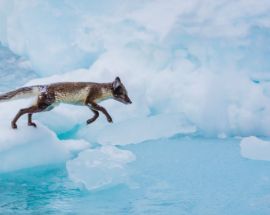 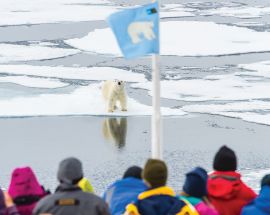 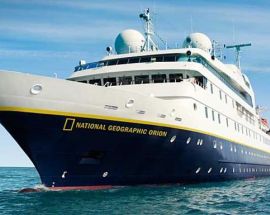