The Chukotka region is one of 85 regions which make up the Russian Federation. Officially known as the Chukotka Autonomous District, it was the last part of Siberia to be ‘conquered' or ‘subdued' by the Cossack invaders from the west. The indigenous people of this region include Chukchi, Inuit, Even, Koryak, Chuvan and Yukaghir, the non-native inhabitants are predominately Russian. The Soviet regime initially treated these indigenous people well, but the collapse of the Communist regime in the early 1990s spelt disaster for the people as they had become dependent upon the state. The election of Roman Abramovich as Governor of Chukotka in December 2000 changed the course of its history. His vision, generosity and leadership gave the people hope, and today Chukotka is taking its rightful place in the Russian Federation. It is rich in natural resources and wildlife is abundant, but like all Arctic fauna, it is under pressure because of significant climate change.North of Chukotka where the Chukchi Sea meets the Arctic Ocean lies the nature reserve and World Heritage site, Wrangel Island, which has outstanding

wildlife values. Sometimes referred to as a Polar Bear Maternity Ward, because of the high density of denning Polar Bears, it is one of those islands that never disappointments those who are keen on natural history or enthusiasts of Arctic history. As the ice retreats each summer (further and faster than ever before) Polar Bears come ashore and we see good numbers of these, likewise walrus find refuge here each summer normally in large numbers. Birds like Snow Geese and Snowy Owls also breed here. And of course Wrangel Island is central to the story of the wreck of the Karluk and it features in other Arctic exploration stories. On this special Chukotka expedition we will meet the people; see and listen to their stories and learn of their love for and strong connection with the land and the sea. We will celebrate with them at their annual Regatta and Festival. We will explore the vast expansive tundra with its wild flowers and dwarf tree species and we will watch for brown bears, reindeer, Arctic Foxes, ground squirrels, if we are lucky we may also see a Wolverine. We will explore Wrangel Island with its Polar Bears, walrus and rich Arctic history and at sea we will keep a look out for whales. Sister ships The Spirit of Enderby and Shokalskiy are fully ice-strengthened expedition vessels, built in 1984 for Russian polar and oceanographic research.

They accommodate just 50 passengers and were refurbished in 2013 to provide comfortable accommodation in twin share cabins, approximately half of which have private facilities. All cabins have outside windows or portholes and ample storage space.

It is important to note that both ships were not built as tourist ships, and therefore the onboard facilities are rudimentary. There is a combined bar/library lounge area and a dedicated lecture room. The cuisine is very good and is prepared by New Zealand and Australian chefs. What is lacking in the way of onboard luxuries is more than made up for by the ships' tough construction, which includes an 1A ice-rating.

The real focus and emphasis of every expedition is getting you ashore as often as possible for as long as possible with maximum safety and comfort. These expeditions are accompanied by some of the most experienced naturalists and guides, who have devoted a lifetime to field research in the areas that we visit. The ships are crewed by a very enthusiastic and most experienced Russian Captain and crew. 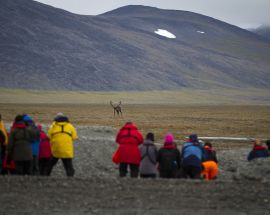 A charter flight is available from Nome, Alaska, across the Bering Sea and International Date Line, to the remote port of Anadyr, and return to Nome at the conclusion of the voyage. These charter flight is highly recommended.

FROM USD $2,000 Per Person (Indicative pricing in NZD. Sold in USD)
request booking Important note: Heritage Expeditions applies a local payment of USD $500 per person in addition to the published cruise fare. This payment is due when boarding the ship.

Important note: Heritage Expeditions applies a local payment of USD $500 per person in addition to the published cruise fare. This payment is due when boarding the ship.

A Russian travel visa is required for this voyage. The passenger is responsible for obtaining this visa, however Expedition Cruise Specialists is able to assist in obtaining the necessary letter of invitation from the cruise line. Please enquire for details.

Please note that this itinerary travels to remote ports and itineraries are subject to change due to whether, the operation of the ship and government regulation. Travellers are  reminded that the itinerary may be altered for any reason and that they should travel with a spirit of adventure.